From Ashes of Creation Wiki
Jump to: navigation, search

While we don't have much information on dungeons yet, we've seen a little bit from the various livestreams that Steven and Intrepid have done.

Open world/Instanced: Quote from the dungeon livestream[1]: "We want people out in the open world, playing; but there is going to be instanced content and that content is going to be across pretty much all experience levels."

Actual Dungeons: The Pre-Alpha dungeon that we've been shown footage of has been named, temporarily, the Water Temple. It featured "Unriven" monsters - skeletons. The HP and AI of these monsters seemed very rudimentary, as expected of a game which hasn't even hit its earliest Alpha stage yet. 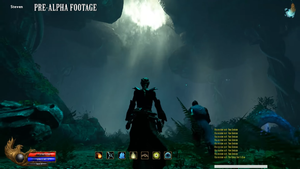